This is the second contract in a series of newly revised sample contracts that AIR will be releasing in 2020.

This sample contract is primarily geared towards a project that will be conceived, designed, developed, and/or produced by an independent producer (the “Producer”), and financed by and/or licensed to a company or station (the “Client”). This sample contract addresses a situation where a Producer has developed an original idea and the Client will provide money and/or in-kind services in exchange for the right to distribute and monetize the finished work.

This contract is appropriate for a producer, storyteller, or other independent audio professional  who has originated the idea for a project and who has done some initial work on the project. Examples of that work might include developing the narrative arc of the project or preparing a pitch deck or presentation (aka a “sizzle reel”). The producer might have done some initial reporting or audio work/recording, or created a whole pilot episode or several episodes.

This licensing agreement gives the Client the right to distribute and monetize the finished work in exchange for the Client financing or otherwise facilitating the production of the work. This agreement is an extremely simplified version of how a financing structure might work. There are many, many different ways the finances for an audio production could be structured, and granting a license in exchange for financing is just one example of how a podcast (or other audio project) can be financed.

While the Producer owns the intellectual property for the project, and under copyright law is considered the legal author of the work, this agreement gives the Client an exclusive, perpetual license to distribute and monetize the finished audio work. See the notes (below) and Section 6.a. of the sample contract for details on the rights granted in this agreement.

AIR’s sample contracts are provided as an educational resource for AIR members. They are designed to model and promote fair terms between independent audio professionals and the shows, stations, and companies that license or commission work from them. Check out all of AIR's sample contracts.

These sample contracts, in concert with our Code of Fair Practices and our work on rates are an important resource for independent professionals in radio and podcasting and for the shows and stations that collaborate with independents to produce great work.

The contracts, and the notes we’ve added to help you make sense of them, are provided as an educational resource. Every project is different and a sample contract is never a substitute for one-on-one legal advice. We worked closely with a lawyer to develop this sample contract and accompanying annotations, but “a lawyer” is not the same as “your lawyer.”

Legal language can be dense, and if your eyes glaze over trying to read it you’re not alone. In most cases it is just English and if you read it over a few times it will start to make sense. But one thing is certain: you shouldn’t sign a contract that you don’t understand.

We are grateful to Quinn Heraty*, an attorney who works extensively in the podcast space, who updated our sample contracts and worked closely with us to ensure the accuracy of the annotations we’ve included to help make sense of the contracts.

* Quinn is a lawyer, but she’s not your lawyer. The annotations and sample contracts are intended to be educational resources for AIR members. Each project, producer, and client will have needs that will not be addressed by the annotations and sample contracts, and none of the information provided here is intended to constitute legal advice or establish an attorney-client relationship. Producers should engage their own attorney to obtain legal advice on any legal matter, contract, or project. Any links to third-party websites are for your convenience only, and don’t constitute an endorsement or recommendation by AIR or Heraty Law. 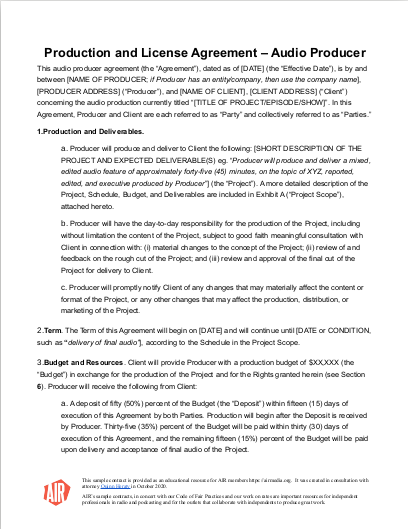 How to Use This Contract

You will need to download the appropriate sample contract and edit the language to meet your needs. Anywhere that you see language [IN BRACKETS AND ALL CAPS] you should replace the brackets and caps with specific details. So this:

2. Term. The Term of this Agreement will begin on [DATE], when Producer begins to render the Services, and will continue until [DATE or CONDITION, such as “delivery of final audio”].

Becomes this in the final contract:

2. Term. The Term of this Agreement will begin on October 5, 2020, when Producer begins to render the Services, and will continue until delivery of final audio.

For example, in one sample contract, we define the producer’s services as: “Produce an audio feature of approximately forty-five (45) minutes, according to specifications provided by Client.“

Instead of referring to “producing a 45-minute audio feature” and we just say “Services” for the rest of the contract.

This convention is important because sometimes there is a big difference between defined, capitalized phrases and non-defined lower-case phrases. For example, “Term” is often defined as the length of time the agreement is in effect, while the word “term,” in lowercase means any provision of the agreement.  A “Party” is usually one of the people that are making the agreement, and “party” usually means someone who is not part of the agreement. So whenever you read a contract make sure you keep an eye on words that are Capitalized and words that aren’t. Sometimes capitalization changes their meaning.

A “Scope,” “Project Scope,” or “Scope of Work” is usually attached to a basic agreement. The Scope might describe the actual story and deliverables. How many episodes and how long are the episodes? Are there any additional deliverables? Does the client expect release forms from interviewees? Photos or text for a web story? A thorough scope of work can help avoid frustration during a project by ensuring that both parties know exactly what the final deliverables are going to be.

We’ve included an example of a Project Scope that you can adapt to describe your project.

The person who owns the copyright controls and benefits from each of these exclusive rights, and they can give someone else permission or a license to exercise one of those exclusive rights (usually in exchange for money or for another benefit).

This is a licensing agreement, which means that the Producer is considered the legal author of the work and owner of the copyright, and the Producer is granting a company, station, or other Client the right to use the work.

While the Producer owns the intellectual property for the project, and under copyright law is considered the legal author of the work, they are giving the Client permission to distribute and monetize the work. See our note on section 6.a. of the contract to see how monetization is referenced in this agreement.

Notes on the Contract Language

Section 3, Budget and Resources: The Producer will prepare a production budget, and will include the Producer’s producing fee as a line item in the budget, and any in-kind services that the Client is providing (such as studio time, recording gear, editing and mixing support, access to music libraries, etc.). The Producer should use AIR’s Rate Guides to help prepare the budget. This agreement is structured so that the Client will provide the Producer with the production budget in exchange for the rights the Producer is granting in Section 6 of this agreement. This is one of many examples of how an audio project can be financed.

This contract includes a very simple financing structure, but there are many, many different ways that financing can be structured for a licensing agreement. The structure suggested in this sample contract is just one (very simple) example.

“Granting the right” is the same thing as “licensing” or “giving permission.”

This grant of rights to the Client will happen as long as the Client is not in “material, uncured breach of this Agreement.” That means the grant of rights will not happen if the Producer has violated this contract in some substantial way (a minor violation would be “immaterial”) and has not fixed that breach.

This section grants the Client perpetual exclusivity. In some cases a Producer and Client will want to agree on a limited period of exclusivity. In those cases our feature contracts might be a better fit.

Section 6.b. This section means that the Client cannot reedit, alter, or remove credits from the finished piece without consulting you.

Section 6.c. This section clarifies that the Producer owns the intellectual property in the project (referred to in this section as “Project IP”). The Project IP encompasses not only the rights in the finished audio piece, but all of the other rights in the project. In this agreement, you are granting the Client an exclusive right to distribute the audio, but you are retaining all of the other rights, including the right to make a television show based on the story in the podcast.

Section 6.e. In this section, if the Client decides to not distribute the project (if they decide to “shelve it” for whatever reason), then eventually the rights the Producer is granting to the Client in this agreement will revert back to the Producer.

Section 8, Awards: We strongly encourage outlets to support independent producers by agreeing to cover submission fees that allow noteworthy work to be considered for awards.

Section 10, Travel and Expenses: as described in AIR’s Code of Fair Practice, it is important to have a clear conversation about anticipated expenses at the start of any project, and if these basic travel standards don’t reflect the Client’s internal travel policy, that should be discussed at the start of a project.