At AIR, we follow a lot of local lists and forums and as audio producers adapted to working from home during the COVID-19 outbreak, we saw many of the same questions pop up, along with quite a bit of excellent advice that we've done our best to collate here.

Update, May 2021: as the vaccine rollout continues, and safe tape syncs become possible again, it is a good moment to remember that there is no remote recording solution that will capture a speaker with the fidelity of a skilled recordist in the room, watching levels, resolving noise sources and positioning the mic well. 🎤🎙️

This resource parallels a living public document where you can suggest edits, correct omissions and flag errors. We've made this resource publicly available but we still encourage you to join AIR to support resources like this!

You may also want to review our round up of resources for freelancers navigating COVID-19 which may help you make an informed decision about whether in-person recording can be conducted safely.

Many of the tools recommended here would benefit from a more extensive review of how they work and whether they’re suitable for non-technical guests. Share your reviews on our living document!

AudioHijack has a lot of fans. A few producers have had good luck using them with a USB mic for long-form interviews.

Cleanfeed is a browser-based recording tool that will work for anyone who has Chrome installed.  Overall Cleanfeed has mixed reviews and one user described it as “buggy”. Cleanfeed requires both parties to have a mic, though at least one user has had success with internal laptop or phone mics. Some producers opt to mail a small plug-and-play USB mic to their interviewee. Usage notes: for most needs the free version is plenty. Look for the “stereo split” option and use it. It does offer right and left channel recording for a quasi sync, but there’s a learning curve and the pro trial is a little buggy, at least on Mac. Notes from one producer scaling that curve: 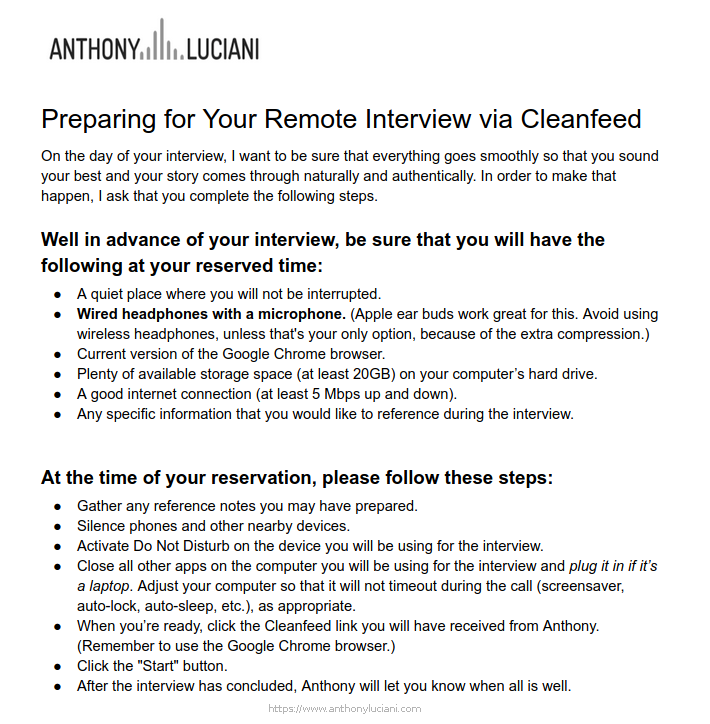 GoogleVoice --  Adam Ragusea at Mercer posted a tutorial in 2016 on How to record a phone interview for a podcast (without using a phone) using Google Voice, a laptop and a Zoom H6. His own introduction includes a disclaimer that the tutorial is old and doesn’t reflect his current setup, but at least one active producer swears by his method in 2020.

iPhone Voice Memo app is great if your interviewee has an iPhone. Aspen Public Radio has a quick instructional video that they send to interviewees, and Andrew Norton shared the instructions he sends to interviewees to show them how to record their own audio on an iPhone while the host or producer interviews them over either Skype or a landline.

One recommendation: ask interviewees to move the voice memo to their computer before they email it. Sometimes phones will time-out while uploading the file to the mail server.  And a caveat: some producers report that subjects with government issued phones may have a hard time transferring files off of the phone. 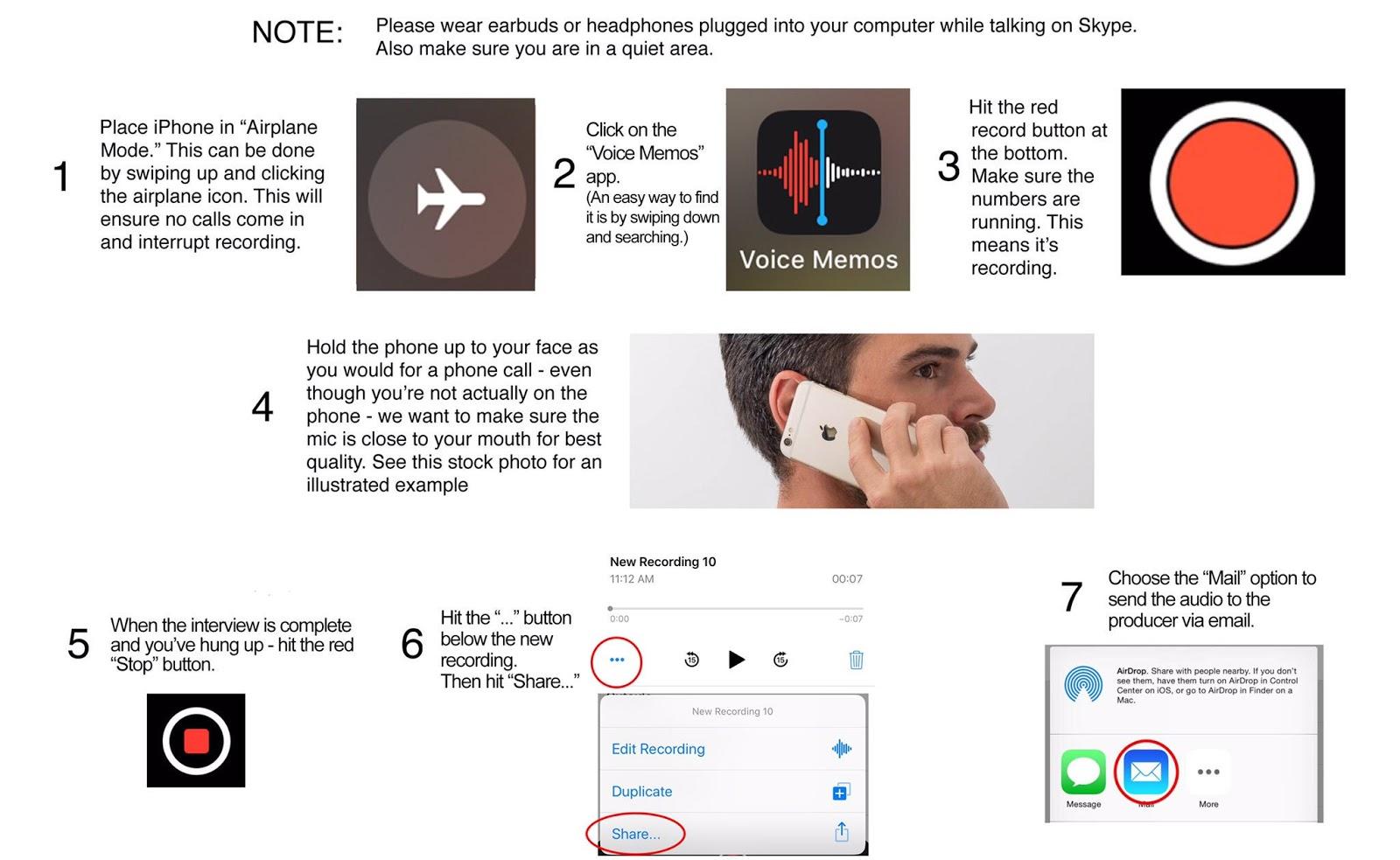 101.1 WBRU, Providence shared their handout, which includes some useful tips on mic positioning: 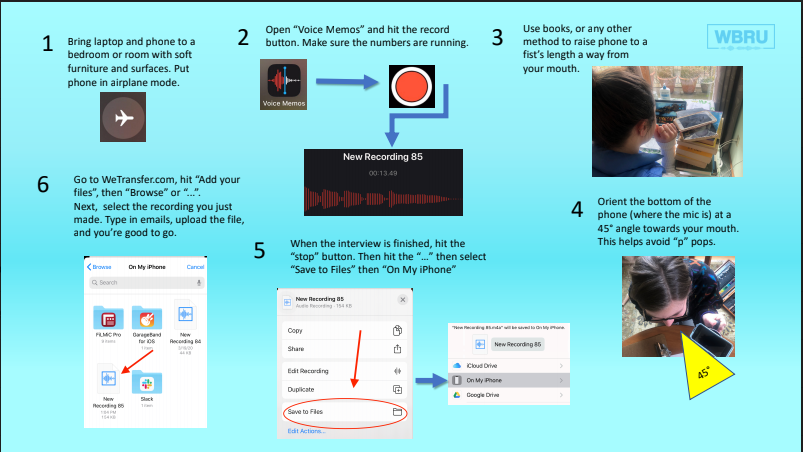 Riverside.fm is a Chrome-based tool that will record up to 8 separate tracks. The tool is new and the users who’ve tested it report that they haven’t had a chance to really compare sound quality with a studio recording or with other tools. As with any remote recording tool, each speaker’s environment and microphone will make a big difference in the final sound quality. Notes: Riverside.fm does not include any calendar function, so it’s up to the producer to provide guests with all the information they need to join the recording session; and, the interface is not always entirely clear to guests so it helps to prepare them on what to expect and set aside some time for troubleshooting. One tester did report that Squadcast has better sound quality.

Skype plus ECamm Call Recorder is a good way to record phone calls and get the guest’s voice on a separate track. You can call a telephone through Skype (not free but relatively inexpensive). This is a good option as a backup to the iPhone tape sync. The approach gets very good sound if the interviewee is on a landline but can be hit or miss with cell phones. ECamm Call Recorder records the Skype call to two separate tracks, your side and their side, so you can get a clean recording of their voice.

Squadcast.fm is available as an Android app or in a browser, and will record up to four participants on separate channels. The audio fidelity is reportedly excellent. Some producers have reported that less technically proficient guests have had a hard time getting Squadcast set up, however.  Squadcast.fm offers an extended free trial for AIR members.

🇬🇧 For producers in the United Kingdom, WhyPay is a free conference call service that offers call recording. You’re still relying on dial-in quality, but for users in the UK who are struggling with bandwidth it may be an option.

Zencastr is a web-based recording system. Reports on “ease of use” vary. Some producers have reported that less technically proficient guests have had a hard time getting Zencastr set up. Others have said that as long as the host and guest have a laptop and headphones, it works seamlessly. Note: Zencastr has vastly expanded the functionality available in their free tier for the duration of the COVID-19 outbreak.

Zoom.us is nominally a conferencing system, but quite a few producers have found that Zoom is a great way to record conversations with guests who aren’t technically adept. Marketplace captured their experiences and recommendations for getting the most out of Zoom to record interviews. In addition, Michael Raphael and the Final Final V2 team published a guide to playing Pro Tools sessions through Zoom on MacOS (March 2020).

Some producers report that the sound quality isn’t as good as Zencastr or Squadcast, but that it is easier for guests to set up.

It is possible to configure Zoom to record separate audio files for each guest. There are two key settings to ensure that you’ll get separate tracks: Zoom has to be set to  “record on the local computer,” (not “in the cloud”) and each guest has to connect using the app on their phone or laptop. If participants dial in by telephone they will not be recorded separately. If the host connects from an iOS or Android tablet or phone, Zoom cannot record to the local computer. It is possible to ensure that everyone connects via the app by disabling the “Telephone” option when you set up a call. A paid pro account is required for conversations that last more than 45 minutes.

There are unconfirmed rumors that  Mac users can use Loopback to reroute a Zoom recording directly to Audacity or Audio Hijack, or that Window users can use Virtual Audio Cable similarly. If you’ve tested this out, we’d love some tips!

A few participants have raised questions about whether or not producers should ask callers to sign a release messages will be used on the air. You should definitely make sure you know the answer that applies to your region -- the technical guidance here assumes you have competent legal counsel.

BuzzFeed’s Openlab released a Story Hotline tool -- it takes some Python to set up and uses a Twilio number, but if that is within reach or you’re game to ask a lot of questions as you “spin up your first Flask app” it’s a great option.

Google Voice will provide a call-in number you can share widely with an invitation to listeners to leave comments. Recordings of those voicemails can be downloaded for use in another recording.

SpeakPipe is a web plugin which lets visitors to your website leave messages -- no phones, no phone numbers. Some producers report better sound quality than Google Voice.

Hotline and Call In Services

A few folks have asked about good options for a conference call type app or service that will facilitate a “call-in” style show.

Connecticut Public Radio has refined a method for screening listener calls remotely for their live call-in show that is working well for them. They’re using Telos Assistant Producer and re-routing calls from an 800 number to individual remote work phones (Extel digital lines connected via internet). A call screener takes one call at a time which they then transfer to Telos system and put in a queue. The host can then put the call on air from their home studio.

Call in Studio allows a producer to take calls in a call-in, talk show format just like a traditional radio station would. They charge about $10/mo for a line and 3¢ /min for incoming calls

Google Voice + Google Hangouts isn’t a perfect solution, but Chris Tsakis shared a tutorial on his method for taking call-ins via Google Voice below.

Blog Talk Radio is a web-based talk “radio” platform. With a Premium account (ranges from $399 to $2499 USD a year, depending on how much you need to use it) you can have one person screening calls, typing up the caller’s details onscreen and placing them on hold. I’ve seen this in action and it works well. There may be similar web-based solutions out there that are cheaper.

Allen & Heath XB-14-2 Compact Broadcast Mixer is a versatile analog board built for broadcast. It retails around $1500 so it isn’t an “interim solution” but if you're getting set up for the long haul it’s worth looking at. It includes two Telco channels for interfacing with phone hybrids. There’s enough routing flexibility in this board to allow you or someone else to screen callers off air. It also has a headphone/speaker switching matrix, remote starts on the board and remote meter and ON AIR light capabilities. There are different kinds of phone hybrids out there at different price points.

Some contributors to this guide recommend asking interviewees to move recordings (or other large files) from their phone to a computer before sending files, as some phones get hung up trying to email very large files. That said ...

Gmail will let you share anything up to 25MB by email but that’s not always the nicest thing to do to someone’s inbox.

We Transfer is also often recommended and will let you send files up to 2GB for free, or with a WeTransfer Pro ($12/mo) account you can send and receive up to 20GB.

This guide is been a collaborative effort and we're endlessly grateful to everyone who shared resources with us and to the many folks who helped compile and edit this guide, including (but not limited to) Amanda Hickman (AIR), Amira Karaoud, E.B. Moss, Robert Auld, Chris Tsakis, Leila Goldstein