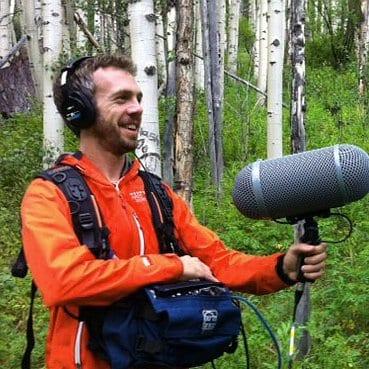 Editor’s note: Welcome to “Ask the Engineer,” an occasional series of technical advice columns from Rob Byers, sound engineer, loudness advocate, and the interim director of broadcast and media operations with "Marketplace" at American Public Media. In this column, Rob tackles what he calls one of the most useful and underused tools in every audio producer's kit: the high-pass filter.

So you want that oh-so-clean “NPR sound"? The high-pass filter is part of the recipe.

It can help you clean up your productions, and it’s super simple to use. Often all you need to do is flip a switch or click a button and you are on the way to preventing problems and cleaning up audio.

Here’s how it works: High-pass filters remove frequencies below a chosen point — they let the high frequencies pass (hence the name) and filter out the low frequencies. They are generally used to remove unnecessary lower bass frequencies like the rumble of a bus or the thump of a bass drum. (If you get confused about the name, don’t worry. To this day I often slip and say the wrong thing — it always helps me to remember that the “highs pass.")

High-pass filters are wonderful at solving a few problems both in the studio and in the field. P-pops can be a prevalent problem in both situations, and high-pass filters (combined with good mic placement) often help to reduce them. In the field, wind buffeting and mic-handling noise can also be tamed with this tool. But there is one reason we should all start using high-pass filters right now: intelligibility.

Too much low frequency makes recorded speech harder to understand, especially when other sounds in the listener’s environment are already competing with the sounds coming out of the radio. The car is a real nemesis here — rolling down the highway, a ton of noise comes at the listener. The same goes for listening while in the shower or the kitchen, or with earbuds on the subway. If speech contains egregious low end, it can get jumbled up with background noise, making it less intelligible. Often the only recourse for the listener is to turn up the volume, which can be annoying.


What not to do

Many producers (and engineers) make the mistake of increasing the low end of their spoken word productions.

Adding low end makes the voices sound bigger, perhaps more powerful, which makes the piece sound like it’s on the radio — before it’s even on on the radio. They are doing themselves and their work a disservice by potentially making the audio harder to understand.

This problem is compounded by the fact that most radio stations actually boost the low end of everything in their transmission chain, because they want a “big” sound that jumps out on the dial.

Podcasts experience a different issue: they are so portable that listeners inevitably listen in all kinds of environments. If a listener can’t understand your work in those less-than-ideal environments, they will simply move on.

How do you use a high-pass filter? You have a couple of options, depending on your equipment: you can add a filter at the mic, the recorder, or in the audio editor.

Regardless of whether you are in the studio or out in the field, I highly recommend engaging the high-pass filter in the microphone or recorder.

Using it at the mic is preferred because it can help prevent problems caused by wind buffeting, p-pops, and even handling noise. The filter on the mic eliminates those nasties before they ever have a chance to make it to the preamp in the recorder, reducing the chances of distortion.

Not all mics have a high-pass filter, but if yours does, you are in luck. Most mics engage the filter with a simple physical on-off switch. A bent paper clip is a great way to move the switch. Take care not to use a pen, which can mark up the microphone — keep a paperclip in your kit. Some of the newer fancy-pants models have electric push buttons to do the same thing.

Different models of microphones have slight variations in high-pass switches (above an AKG 414, left, and an AKG 452). The high-pass filter is denoted by the “L” turned clockwise.

Filter with the Recorder

If your mic doesn’t have a filter, you can often engage it on the recorder. You’ll need to read the manual for your specific device, but it’s usually as simple as turning the filter ON and then choosing a cutoff frequency (you’ll likely have a choice of a couple different options — we’ll talk about frequency choice in a bit).

Note: You may have to do this for each channel if you are recording on more than one — many recorders let you mix and match settings across channels, so it’s possible to have the filter engaged on one channel and not on the other.

If there are filters on both your mic and recorder, you don’t necessarily need to use both, especially in the field where you can’t hear the full impact of the filter.

Filter in the studio

If you don’t have a high-pass filter on your mic or in your recorder, you need to do it in your audio editing platform.

The steps will be different for each platform, but the foundation is usually the same. Insert an EQ plug-in on the track to be high-passed and open it. There are likely many, many knobs and buttons in the plug-in: To find the high-pass filter, look for an upper-case L that’s been tilted clockwise or the letters “HP." You probably need to click it on and then choose the cutoff frequency.

Ask the Engineer: Don't Fear the Filter from AIR on Vimeo.

When mixing I generally throw a high-pass on actualities, tracks, and ambi. Yes, even ambi, because mic handling or wind buffeting eventually shows up in everyone’s ambi. (I rarely high-pass music unless I feel like it’s competing with something in the mix.)

You have a choice of frequencies to pick from if you apply the filter at the recorder or in the audio editor. This frequency is the cutoff frequency, the place where the filter begins to eliminate lower frequencies.

I generally gravitate towards 100Hz because it helps with most problems, including intelligibility — and it’s easy to remember. I will sometimes go as high as 120-150Hz if 100Hz isn’t cutting it (bad pun intended).

Anything above 120Hz for male voices and 150Hz for female voices and you will likely find that the filter has too much of an impact on the sound of the voice. Many people choose 80Hz as their go-to high pass frequency, but I find that it doesn’t help with intelligibility on the radio and isn’t as immediately helpful with a wider range of problems.

A word about slope

Some microphones, recorders, and plug-ins offer high-pass filters with varying slopes. The slope controls how aggressive the filter is below the chosen frequency. The more aggressive or steep a filter is, the more frequencies it removes.

Microphones usually have one or two options — the more aggressive filter is the one with the steeper slope, where the left side of the turned-L is steeper and closer to being straight up and down. Recorders and plug-ins usually set slope using numbers (measured in decibels per octave), where the higher number means a more aggressive slope.

Try setting your slope at 18dB/octave. Much higher than this and the filter sounds unnatural. Many EQ plugs start with the filter at 6 or 12dB/octave, which is (sometimes) not steep enough to help.

At the top of this image, you'll see the shallower slope of 12db/octave. This is a typical default setting for plugins, but it is sometimes not quite high enough to prepare voice recordings for radio and podcast purposes. It depends on the voice and the plug-in.

At the bottom, check out the aggressive slope of 24dB/octave, which can sometimes remove a bit too much low end.

At right, note the Schoeps CMIT5U with two different slopes, denoted by the two different angles in the turned-over “L” symbol. The lower option is the most aggressive with the steepest slope -- it will remove the most low end.

High-pass and your ears

If you are in the field and using headphones, remember that you aren’t hearing all of the low end information you are recording. There may indeed be things happening down there that are of no use on the radio, but it may sound like nothing changes when you engage the high-pass filter.

Headphones just can’t reproduce low end like a pair of studio monitors can, so take care that you are using a frequency that is helpful but not too aggressive. In the field, in the interest of safety and to save time in mixing, I favor a higher filter of 110Hz with a slope of 18dB/octave.

And a little common sense

To learn more about how your gear behaves and what the different frequencies sound like, experiment!

Try to make some p-pops, mimic recording ambi, and create some mic handling noise. Record your voice in the studio with your mouth too close to the mic (to amplify the low end in your voice), record on the street with buses flying by. Do all of this while turning the filter on and off, or bring it back into the studio and apply the filter in your audio editor.

Listen to your pieces on the air while you are riding down the highway in the car — this is a great test for intelligibility. (Adam Ragusea, in an AIR/PRX webinar we participated in, suggests recording car ambi and mixing it underneath your piece as a way to check your mix. A great tip!)

Until next time, remember that it’s all about intelligibility. The high-pass filter is your friend!

Rob Byers (@RobByers1 on Twitter) is the interim director of broadcast and media operations with "Marketplace" at American Public Media, an NPR “alum,” a classically trained percussionist, a jazz enthusiast, and a member of AIR’s network. Over the years, he has been lucky enough to engineer recordings with Yo-Yo Ma, Rufus Wainwright, The Knights, Béla Fleck, Joshua Redman, Josh Ritter, Yo La Tengo, Cyrus Chestnut, and many others. He gave a recent, terrific webinar about audio levels, and he thinks everyone needs to know about #loudness.

Have a question for Ask the Engineer? Email [email protected].

Want to use this tool?