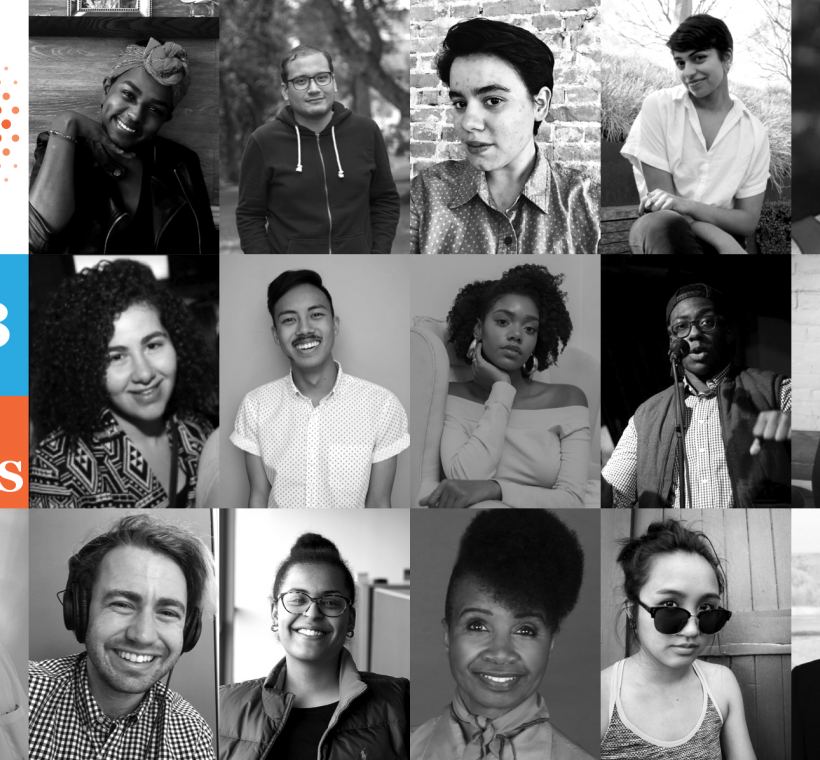 July 23, 2018—We're excited to introduce you to AIR's 2018 New Voices! This cohort marks a decade of New Voice Scholars—over 200 makers and innovators working for change and taking names in media. In partnership with Third Coast International Audio Festival, AIR welcomes the 2018 New Voices to the Third Coast Conference in Chicago this October.

Hailing from all over the country and spanning the ages of 21 to 50, 2018 New Voices encompass academics-turned-storytellers, artists, novelists, audio engineers, and brand managers. One New Voice had a past life as a police officer and wants to launch four podcasts in the summer of 2019. Another has a verified pastry obsession. There’s a children’s book author in the ranks, and a public health analyst who makes multimedia stories by night.

They are creators focused on LGBTQ+ rights, race, identity, culture, and beyond. You can catch their work on local stations and podcasts including WBEZ, WHYY, KUOW, Code Switch, Radio Ambulante, Latino USA, Every Little Thing, and Youth Radio. Returning captain Afi Yellow-Duke (NV ’16) will guide them through three days of networking, learning, and professional development at Third Coast.

Submissions reached a record high this year, with applicants bringing in diverse backgrounds and perspectives across communities. That’s why we’re pleased to include four honorable mentions who will receive funding to cover their Third Coast Conference registration.

Meet everyone and listen to their work below!

Galilee Abdullah is a 24 year old audio producer and storyteller. She is originally from Dallas, Texas, and is Ethiopian. She received her Bachelor of Arts in Cultural Anthropology from Northwestern University. She was most recently a production intern for Worldview on WBEZ. She loves to talk about music.

Cassius Adair is an associate producer at With Good Reason, a public radio program based at Virginia Humanities in Charlottesville. He interned at Michigan Radio and taught English and Transgender Studies at University of Michigan. Cass is from Virginia Beach, Virginia. He wants to tell Southern stories that are true.

Jordan Bailey has produced work for Al Jazeera’s Jetty Studios, and produces and co-hosts the independent podcast Black Girl Book Club. She also co-edits an art magazine called Undertone Mag, and she’s passionate about creating space for women of color to share stories about themselves and the world they live in.

Angelo Bautista is a recent graduate from Indiana University where he studied media studies and audio journalism. He was formerly a talk radio producer and reporter with WFIU and a producer of IU’s student-run podcast, American Student Radio. He is currently the intern for NPR’s Code Switch team, focusing on the messiness of race, identity and culture.

Luis Fernando is Radio Ambulante’s assistant editor, the first spanish-language narrative podcast from NPR. He lives in Costa Rica and has done stories about mental health and LGTBQ+ rights in his country. He holds a bachelor’s degree in Mass Communications and Journalism from the Universidad de Costa Rica.

Zakiya Gibbons graduated from Haverford College in 2015 with a degree in anthropology and psychology. She interned at WHYY-FM during her senior year of college, and went on to intern at StoryCorps and WNYC before becoming an Associate Producer for NPR’s Latino USA and Gimlet Media’s Every Little Thing. Zakiya is also a 2018 Third Coast Radio Resident. At the residency, she had the opportunity to workshop an experimental, fictional podcast that she’s had in the works for a while. Today, she is an independent audio producer based in Brooklyn, New York, where she continues to work on the podcast. Zakiya is a proud southerner and lover of eel and avocado sushi.

Morgan Givens is a storyteller, writer and producer based in Washington, DC. He’s been a DC police officer, and helped to rewrite their training curriculum, has worked at Just Detention International to eliminate sexual violence in prison settings, and is hard at work finishing a novel. He hopes to launch four podcasts in the summer of 2019.

Cherry Griffin is CEO of Alleviate Inc. and Destiny Talk Live Radio Show (DTL). Cherry has over 30 years of experience in business consulting, brand management, training and development and human resources solutions. DTL debuted in 2017 on the Sensation Station Network. She is currently a full-time student at Oglethorpe University.

Pedro Lugo-Velasquez was born in New Jersey in 1984 to migrant Puerto Rican parents. After moving back to the island a few years later, he studied in the rural parts of the island. He went on to study art at the University of Puerto Rico’s Rio Piedras campus in San Juan. He was part of the student radio station Radio Huelga (Strike Radio) with hid own political humor, interview and sketch program. He then worked for some moths with the official university station as a volunteer. At that time he started publishing his own political commentary comics and zines. He also holds art and creative writing workshops for children of low income areas.

Ariana Martinez is an artist and audio storyteller currently working in Providence, Rhode Island. Through narrative audio, sculpture, and print media, Ariana works to understand the relationships between people and the places they inhabit. Ariana is a proud alumna of Now Here This, Brown University’s student audio storytelling collective.

Imani Mixon is a Detroit-based and embraced journalist who reports on neighborhood change and creative independence. She explores narratives of acquiring and returning, necessity and desire, and the overwhelming coolness of all things Black. Currently, she recruits residents from Detroit’s MorningSide neighborhood to produce a community podcast, MorningSide 48224, in cooperation with Michigan Radio and the Detroit Journalism Cooperative.

Angela Nhi Nguyen is a self-described “cisgender sis with a knack for conversations, puns, and awesome alliterations.” Originally from Seattle, Washington, she’s now a Brooklyn-based podcast producer. She got her start in KUOW’s RadioActive and since has worked with the likes of The Takeaway, NPR’s Next Generation Radio Project, and currently, Youth Radio.

Zuhdiah Sarhan is a public health analyst by day and multimedia creative by night. Based out of Northern Virginia, her writing and visual work focus on local stories from underrepresented communities. She is co-founder of Women of Color Podcasters, a Facebook community for podcast creation by women of color.

Irene Smalls is an author, storyteller, and graduate of Cornell University, BA, and New York University, MBA. The author of several books for children, Irene has been a lifelong activist. Irene is the founder of Wari House, the first Black Women’s official residence on an Ivy League college campus celebrating it’s 50th anniversary. Irene was also the founder and first president of the Cornell University Black Alumni Association.

Derrick Toledo is the New Mexico Fellow for the Institute of Policy Studies in Washington DC. Before arriving in DC he was the audio engineer for the award winning and nationally broadcasted Native America Calling and National Native News.

Founder of Face a Face, and past contributor at AFROPUNK and WFYI.

Multimedia producer at WBEZ’s Curious City and producer of Beyond the Seal web documentary and The Life of an Undocumented High-School Senior.