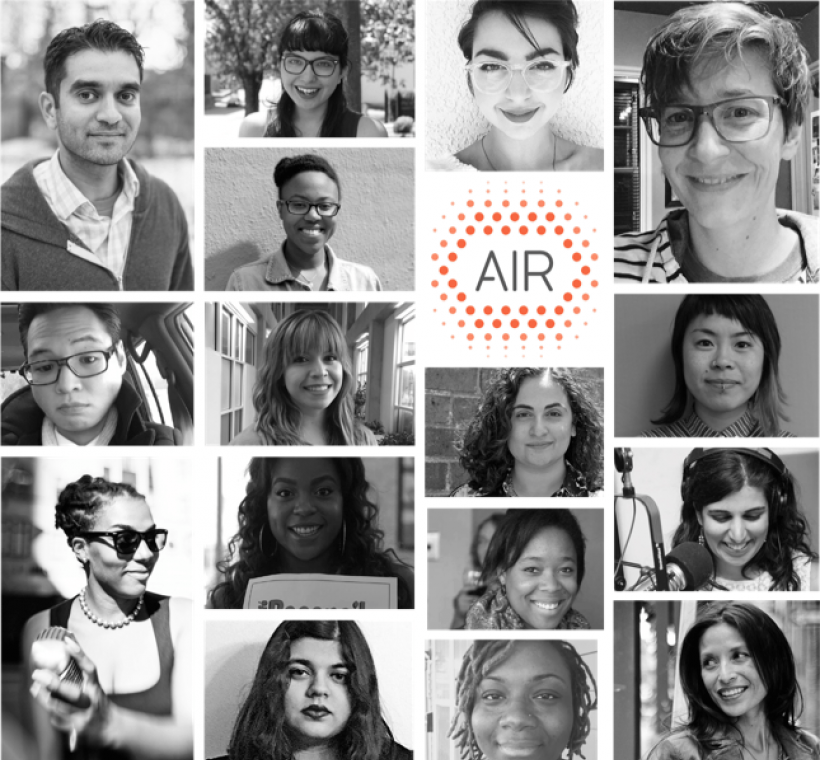 In partnership with Third Coast Conference, AIR is proud to introduce our eighth class of New Voices scholars, an opportunity made possible with support from the Ford Foundation and the National Endowment for the Arts.

We hope you will join us in introducing them to the public media universe at the Third Coast Conference in Chicago this fall. (To hear their work, check out this playlist.)

The 2016 class was selected from an extremely competitive field of early career talent. This year's scholars cover a 30-year range of ages, and include experimental social activists as well as beat reporters, those who came up in well-known institutions and those who bring unconventional experience to their work. They are distinguished by excellence in craft, commitment to diversity, and potential to become the future of public media.

For more information about this year’s New Voices scholars, or any of the 155 alumni of the program, contact [email protected].

Geraldine is an independent radio producer and the creator of “In Plain Sight,” a podcast that celebrates stories of everyday activism from Asian and Asian American women. She also works in print, film and sound design, and is a graduate of KALW’s Audio Academy.

Ann Marie Awad is an education reporter for KUNC in Northern Colorado. She’s a first generation Egyptian-American, born in Buffalo, NY. Her journalism career began at 19 and eventually brought her to CUNY Graduate School of Journalism, where she discovered public radio and has been hooked ever since.

Kyle Norris muscled his way into radio as an intern in his mid-30s. His features have appeared on NPR, Marketplace, The Splendid Table, World Vision Report, Justice Talking, The Environment Report and The Health Show. He’s a host and producer at Michigan Radio.

Lakeidra is a reporter for KTOO Public Media in Juneau, AK. She covers city government in the state’s capital. Chavis has interned for NPR’s Morning Edition and reported for KYUK Public Media in the Alaska bush. She participated in the ProPublica Summer Data Institute earlier this year.

Joel comes from a rich tribal culture. Growing up, his family expressed how important it is to communicate in order to preserve their culture. Joel actively worked to help preserve his tribal culture, including visiting his tribal village to record his people through modern media to capture their ways of life for a micro documentary. He is Joel de Jesus of the Inupiaq people.

Mimansa Dogra is a student at the University of Chicago. She is an enthusiastic NPR listener and also is a fan of fictional podcasts. She joined KUOW’s youth media program, RadioActive, and is now an Advanced Producer at the station.

Keisha “TK” Dutes is a freelance producer, event host and longtime media personality. After a seven-year tenure at WBAI – FM’s “Rise Up Radio” and a degree in communications, she co-founded Bondfire Radio, an interactive digital network where she hosts “TK in the AM” and serves as program director.

Rebekah Entralgo is a freelance producer and reporter living in Miami. She is currently the radio news intern at South Florida’s NPR member station, WLRN. Previously, she has completed freelance work for the Gimlet Media show “Science VS,” and the Radiotopia show “Criminal: A Podcast.”

Alisha is from University Park, Illinois. She is mother of three, a recent graduate, and an over all people-lover. Her hope is to change the way people of color are portrayed in media. She wants to tell whole stories that open minds and hearts!

Asha was born and raised in Maryland. She moved to New Orleans two years ago, where she recently graduated high school. During her senior year, she met Eve Abrams and began developing her story with Unprisioned on the school-to-prison pipeline. She now attends Bard College and plans to study sociology.

Sarika is the founder, host and producer of Intersections Radio, an independent podcast on all things identity politics, specializing in race, ethnicity and intersectionality. After a decade of working with linguistic minorities across the US, she found her place in broadcast journalism and sign language interpreting.

Since 2006, Jenni exclusively devoted her journalism to works focused on global indigenous societies including a cross-disciplined collection of short films, a documentary in-progress, radio reports and most recently interactive longform feature writing. She is a Columbia Journalism alum, an NFCB board member and a tribal citizen of the Laguna Pueblo.

Recent UNC grad Samantha is a DC-based business reporter and independent radio producer. Her latest project, Good Grief, is an narrative-driven podcast that follows her journey to reconnect with her Native ancestry and with her estranged father after his death. During the day, she works as a reporter at DC Inno covering startups and innovation.

Afi is a producer at Pitch, a narrative music journalism podcast. Before Pitch, she interned at StoryCorps and WNYC’s Studio 360. A Brooklyn, NY, native, she holds a B.A. in Sociology/Anthropology and Dance from Middlebury College.