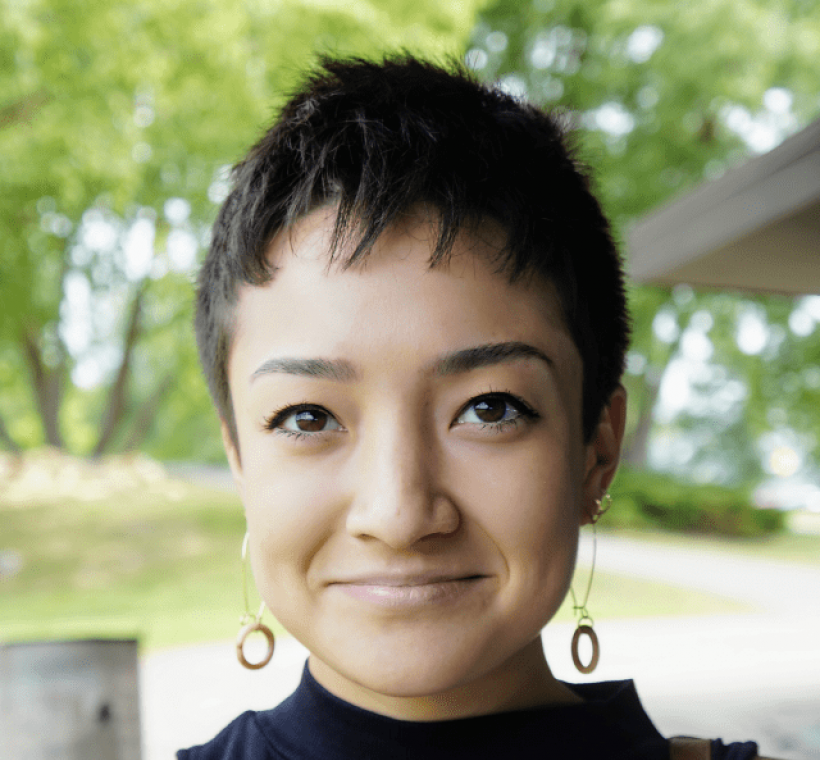 I'm an independent writer and audio producer from Minneapolis, MN, now based in Brooklyn, NY. Audio has been an on-the-side thing for me for a while (I have a professional background in nonprofit narrative arts), but this year I started producing full-time, which feels like a real dream! I'm currently on contract with NBC's Audio Unit, and I have a few other projects in the works, as well.

Before I left Minneapolis, I was producing Minnesota Public Radio's "In Focus" program, an event series focused on social disparities in my home state. We hosted roundtable conversations about dismantling barriers to reentry after incarceration, minimizing racial disparities in healthcare, and supporting our neighbors during Derek Chauvin’s murder trial earlier this year. Not to be a public media cheeseball, but my favorite part of this project was how much room it gave me to advocate for broader definitions of what "good talkers" sound like, especially when we bring these voices together. My brilliant colleagues at MPR are carrying the series forward, and I can't wait to see what they do next.

I'll also mention the miniseries I just helped produce at NBC: Southlake. It's a story about a Texas public school district's attempt to introduce new diversity & inclusion policies, and the politically charged fallout in that community and beyond. I'm super grateful to the team at NBC for such a fantastic opportunity to learn and grow. Our series finale just dropped this week!

I love how messy, daunting, and subsuming storytelling is! “Telling” a “story” often means setting off with only the haziest of maps and being open to side quests, shortcuts, long breaks, and new beginnings. I'm unfortunately a huge control freak, but I think the reason I'm able to give myself over to storytelling — to relinquish control and let the story guide me — is that "the story" isn't one contained thing. It's a bunch of interactions. It's voices in conversation. It's redirection and new information. It's surprise. It's confusion. It's what happens to you as you're making it. It's all of this, organically coalescing around whatever we (together!) shepherd it into. It doesn't have to be a solitary pursuit, a thing I make in private and share with you when it's "ready." It's an end product, but it's also everything that happens to get us there. I guess what I'm saying is: Maybe the real story is the friends we made along the way :')

The spirit of New Voices really feels to me like it's in the service of not only imagining but actualizing better futures — both within the audio industry and in our communities, and I love that a space like that exists specifically for audio newbies.

I just moved to Brooklyn and have been working on familiarizing myself w/ the radio dial — New Yorkers, please send me your recs for local stations & shows I should put in my heavy rotation!

Audio: Famously not a visual medium. Me: A highly visual learner/thinker/maker. Usually this means I'm working off a million post-its on a blank wall, or consulting a notebook full of literal scribbles. But for a paperless version of this, you can't do better than Miro.

Not only do I want to see more entry-level opportunities in radio for people with "non-traditional" backgrounds; I also want to see better capacity-building in newsrooms/editorial offices to support these positions! The work of making workplaces "more inclusive" can't fall to a handful of inspired individuals — it has to be planned out and accounted for in workflows, budgets, and staffing.

I don't know if I can name just one! But categorically, I always learn a ton from sound designers and engineers. I've worked with a bunch of absolute gems in this field who are always eager to answer my questions by showing me how to do it myself — with an abundance of patience, an open mind, and a we're-in-this-together attitude.

Get in touch! Let's be friends. I'm @rachelayang on Twitter.