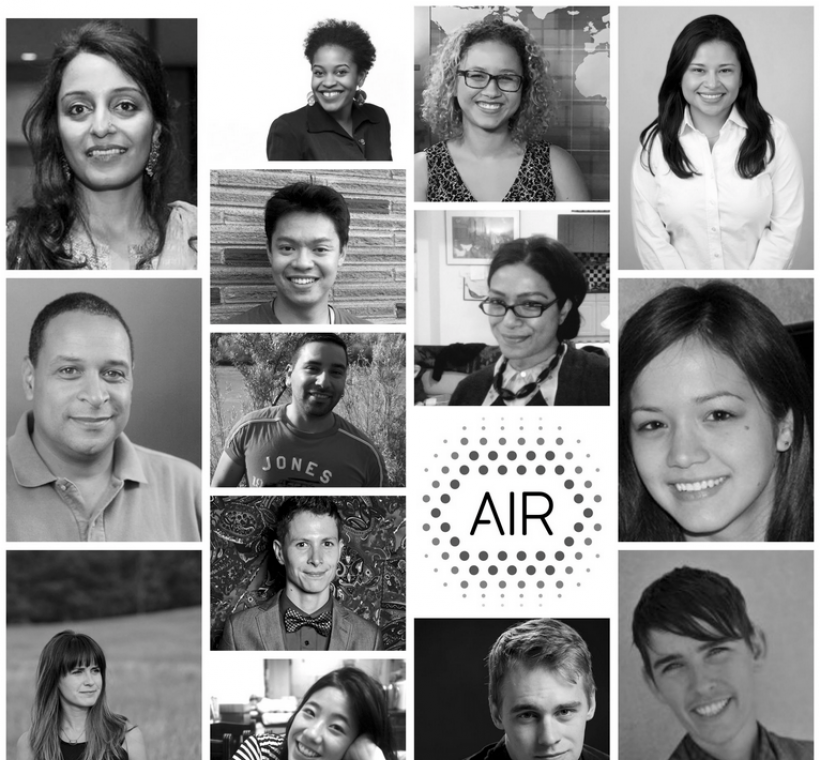 AIR is proud to introduce our seventh class of New Voices scholars.

We hope you will join us in introducing them to the public media universe at the Public Radio Programming Directors conference in Pittsburgh this fall. (To hear their work, check out this playlist.)

The 2015 class was selected from an extremely competitive field of early career talent. This year's scholars cover a 30-year range of ages, and include experimental social activists as well as beat reporters, those who came up in well-known institutions and those who bring unconventional experience to their work. They are distinguished by excellence in craft, commitment to diversity, and potential to become the future of public media.

For more information about this year's New Voices scholars, or any of the 155 alumni of the program, contact [email protected].

Wayne is a graduate of Yellow Springs High School and Central State University in Ohio. He has worked in print media for several years, covering news and sports. He has served on a committee for the Yellow Springs school system and on the Human Relations Commission, and now produces and reports for WYSO 91.3.

Ayana is an artist that works in sound. A host/producer at Vocalo 91.1fm (a sister station to WBEZ), she is also a DJ and music historian. She is a 2014/2015 Arts + Public Life Artist-in-Residence at the University of Chicago.

Steven is an independent radio producer based out of Albuquerque, New Mexico. He attended the Salt Institute for Documentary Studies in Portland, Maine, where he produced stories about paranormal investigators and the AIDS quilt. He  is the broadcast engineer for Native America Calling and National Native News.

Summer is a senior at the University of Chicago, where she studies sociology and linguistics and is completing a bachelor’s project about people of color in radio. She is a Chicagoland native, the oldest of four girls, and a podcast producer who spends her free time watching “Curb Your Enthusiasm,” listening to Frank Sinatra, and making GIFs.

Arshia  is a filmmaker, writer and DJ. She is the founder of Discostan, which presents narratives from North Africa, the Middle East, South and Southeast Asia. Topics include migration, nostalgia, homeland, borders, often within realms of Islamic influence, through lenses of traditional forms and kaleidoscopic reinventions of pop culture.

Christine spent nine years studying chemistry before she left the bench to report on issues at the intersection of science and society. She started in radio in 2014, reporting on women’s health issues as a journalism graduate student at the University of Illinois.

Liz is a writer and radio/multimedia producer based in Oakland, California. Her work has appeared in various outlets, including The New York Times, BBC, NPR, KALW, and KQED. Liz graduated from the University of California at Berkeley. She holds a certificate in photography and multimedia from the Salt Institute for Documentary Studies.

Alan is a New York-born and Hong Kong-raised Filipino with a degree in Chinese literature from Reed College in Portland, Oregon. He started at KBOO, PRP, and XRAY before joining Oregon Public Broadcasting as a production assistant intern on “Think Out Loud,” OPB’s daily news and current events program.

André founded the Transgender Oral History Project in 2007 and created a traveling multimedia history exhibition in 2009. As director of I Live for Trans Education, André created a grassroots multimedia curriculum, reaching 8,000 people. André has recorded over 500 interviews as part of StoryCorps, including 50 segments on NPR and WBEZ.

Pritha is a social entrepreneur working in civic engagement, the future of elder care, and the sharing economy. She is also a strategist and capacity consultant. In a prior life, she was an anchor for Metro News Radio Hong Kong; and a freelance journalist for The South China Morning Post, Cineaste Magazine, and Sojourner Newspaper.

Pita is a multimedia journalist covering social issues with a focus on Latino communities. Pita is a contributing writer for Spanish publications and is working on a documentary about healthcare within the immigrant community in Phoenix, Arizona.

Elaine is an award-winning documentary filmmaker and storyteller. She’s the director of HOLLOW, an interactive documentary about Appalachia that received a 2013 Peabody, 2014 Emmy nomination and third Prize in the World Press Photo Multimedia Awards. She’s the co-creator of She Does, a podcast about women in media.

Luke is an audio journalist, theater artist, LGBTQ activist, and, more than anything, a lover of stories. He’s the creator of the More Than a Single Story Project and a board member of the LGBTQ group OneWheaton. He is also a former Vocalo Storyteller. Learn more at lukevanderploeg.com.

Lewis is an editor and reporter at WYSO in Yellow Springs, Ohio. He got his radio start through a fellowship at WBEZ in Chicago, where he was a community organizer around issues of policing. Originally from Michigan, Lewis spent years as an anti-oppression trainer, barista, and sex educator.