Deadair Dennis Maler is a host, producer, and audio engineer currently residing in Boston. His introduction to audio started at 8 years old when he fixed his father's old record player in the garage so he could listen to his Chipmunk Rock vinyl record.

From there he built his first multi-track recording and editing equipment at age 17 to record his friend's band in their grandmother's basement. Throughout high school, Dennis' studies focused on acting, theatre tech, and video and audio recording equipment.

It was the first day of college he changed his college major from Civil Engineering to Television and Radio production at Montgomery College.  He excelled in his studies in college, which lead to him being recommended by his professors to Operation Managers at iHeartMedia D.C. for work.  While at iHeart he ran the gambit of jobs. Starting as a board operator, he learned how to produce live talk shows and sporting events. His ability to quickly understand radio station operations, tech knowledge, and calm under pressure lead him to be recruited into the engineering department where he was part of the team responsible for studio build-out, equipment maintenance, and remote broadcasts.

Over the years Dennis' desire to be in front of the mic forced him to pursue newly available positions at iHeartRadio Baltimore, the sister cluster to D.C. He was one of the first employees at the newly launched alt-rock station Channel 104.3. There he would continue his work as a performer by hosting overnights, weekend, and fill-in positions. Unfortunately, after 18 months, the station flipped yet again to CHR-Rhythmic station Z104.3. Being one of the few employees to remain, he was responsible for segueing music, editing voice tracks, going on-air at times, and co-producing the morning show The Jackson Blue Show.

Dennis eventually transferred to Boston, MA to work as a producer for Total Traffic & Weather Network, where he occasionally would fill-in as a traffic reporter on holidays and when the regular reporter would, ironically, get stuck in traffic.

He currently a freelance performer, producer, and recordist for hire throughout the New England area. Dennis is available for hire to produce and edit your audio and video projects, as well as host your live and/or recorded event. He is a true entertainment Renaissance man who is as talented and comfortable in front of a mic, camera, or on-stage, as he is behind the scenes making sure everything goes smoothly from pitch to air. 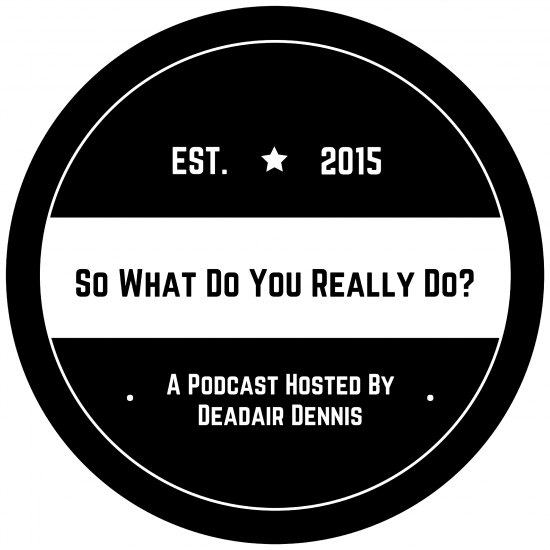 So, What Do You Really Do?
So, What Do You Really Do? A podcast hosted by Deadair Dennis Maler talking with comedians, artists, and entertainers about their day jobs. Deadair Dennis is a comedian, a radio vet, and entertainer who has held many terrible day jobs while trying to achieve his goal of paying his rent from performing. Over the years he has worked in construction, restaurants, sales, radio, and soul-sucking, florescent lit offices. Luckily over the years he has met a staggering amount of other artists who have amazing interesting careers while still working at night to make it as an actor, comedian, musician, artists, etc. Sit down with him as chats with some of these amazingly talented artists.