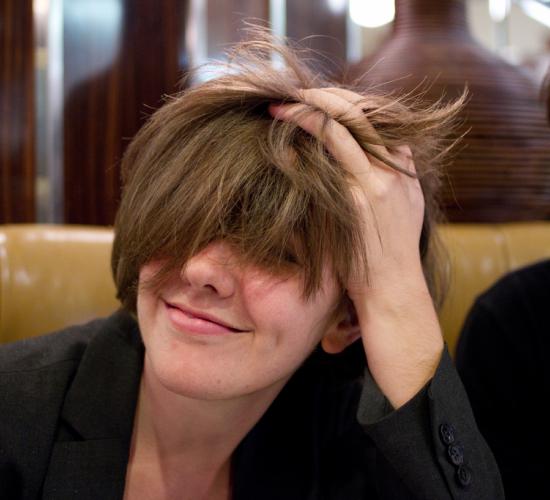 Caroline is available for

Caroline Creaghead is a filmmaker and who at one time produced the stand-up comedy shows that helped define a Brooklyn scene which included Hannibal Buress, H. Jon Benjamin, Jacqueline Novak, Max Silvestri, Jon Glaser, Eugene Mirman, Kate Berlant, Sunita Mani, Michael Che, Josh Gondelman, Aparna Nancherla, John Early, Joe Pera, Kurt Braunohler, Kristen Schaal, Janelle James and many more comedians of exceptional talent who you may or may not be familiar with but would definitely dig.

As a producer and curator of outstanding artists, she has worked with such clients and partners as Brooklyn Academy of Music, IFC, Comedy Central, Above Average, Seeds of Peace, 92nd Street Y, Sundance TV, AEG Live and Audible.

Her work has been recognized in The New York Times, NYT ArtsBeat, Backstage, Brooklyn Vegan, Vulture, TimeOut New York and The Interrobang among others.

She's produced shows and tours from Seattle to London and also spent time on the production staff of The Onion, "The Colbert Report," "Onion News Network" and "Onion SportsDome."

Based in Los Angeles, Creaghead is now collaborating with her network of accomplished writers and performers to create narrative and non-narrative projects for screens and sometimes speakers (you know; podcasts).

Check out her more recent work, including the short film "FLEX" written by and starring Charles Gould, which was awarded a Special Mention at Outfest LA where it premiered August 2020, as well as various video works created with and for Reggie Watts.

Brass Taxes
Brass Taxes podcast features honest conversations with freelancers, artists and friends of Brass Taxes willing to get real and open up about their personal finances. Hosted and produced by Caroline Creaghead with Rus Garofalo, the show is refreshing, funny, and a good reminder that wherever you're at in your relationship to work and money, you're not alone.